A Joyful Hope: The Second Coming of Jesus

This article, written over twenty years ago, seems to me a direct response to the recent hysteria generated by Harold Camping’s false prophecy’s re Christ’s Return May 21 2011. 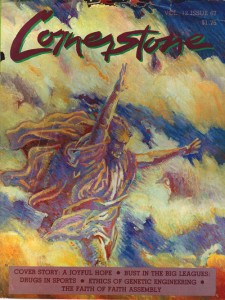 I feel angry. Angry at those who have made the coming return of Jesus into a joke, angry at Christians who spend their time hunting for the Anti‑Christ instead of seeking to serve, angry at rapture post‑trib, pre‑trib, pan‑trib, doctrinal wrangling, and angry at myself for a “let God take care of the second coming” attitude. Where is the passionate awareness of God’s reality that makes the return of our Lord so vital?

I recall a meeting I attended with some friends, a conference on serving the poor, protesting social injustice, being a prophetic voice in the world. We were appalled when one conference leader, a well‑known evangelical, cynically belittled the idea of an actual return of Christ.

Such an attitude calls not only Jesus’ return into question, but biblical authority itself is challenged. The Old Testament refers specifically to the Messiah’s return in passages like Daniel 7:13‑14 and Psalm 110, while Jesus in the New Testament tells not only his followers, but even the Jewish Sanhedrin of his return:

“Are you the Christ, the Son of the Blessed?” asked Caiaphas, the high priest. He received a razor‑edged reply: “I am, and you will see the Son of man seated at the right hand of Power, and coming with the clouds of heaven” (Mark 14:61,62).

Earlier Jesus had explained what to expect and watch for leading up to his return (Matthew 24, Mark 13, Luke 21). There is no room for attempts at “symbolizing” or explaining away these chapters. Mark 13:24‑27, for instance, describes the second coming in quite physical terms, first concerning the darkening of the sun, moon, and stars. “And then,” says verse 26, “they will see the Son of man coming in clouds with great power and glory.”

It should be understood that practically every New Testament book verifies the second coming. A few of the more well-known verses: Jesus “goes to prepare a place,” then will return for believers, John 14:1‑3; Peter’s Pentecost sermon on the end times when “whoever calls on the name of the Lord shall be saved,” Acts 2:10‑21; Paul’s detailed instructions for living righteously in I Thessalonians 5:1‑23, “So let us not sleep, as others do, but … keep awake and be sober”; James encouraging patience until Jesus’ return, James 5:7‑11. A quick buzz through Nave’s Topical Bible yields over forty separate New Testament passages dealing with the second coming.

To suggest this event will not occur as it is described in Scripture is to make shambles of the Bible’s integrity.

“Let me warn you that many preachers and Bible teachers will answer to God some day for encouraging curious speculations about the return of Christ and failing to stress the necessity for ‘loving his appearing’!,” writes A. W. Tozer in I Call It Heresy. “The Bible does not approve of this modern curiosity that plays with the Scripture and which seeks only to impress credulous and gullible audiences with the ‘amazing’ prophetic knowledge possessed by the brother who is teaching or preaching!”

How accurate an assessment of the current theories concerning a “conspiracy” supposedly being hatched by the Catholics, the new age movement, or the tri‑lateral commission, pick one of the above. This secret group of individuals is carefully orchestrating world events to usher in the Antichrist; as believers we are told we must stop them or at least be aware of their nefarious schemes.

Tozer’s punch line is a TKO: “I cannot think of even one lonely passage in the New Testament which speaks of Christ’s revelation, manifestation, appearing, or coming that is not directly linked with moral conduct, faith, and spiritual holiness.”

THE LAST DAY VS. TODAY

It has only been recently that I have found the words, “Come quickly Lord Jesus!” entering my prayers. Perhaps, the over spiritualization of the world’s condition by some (celebrating present evil because it signaled a coming good) helped my hunger to cool. I recall having an actual aversion to the subject due to such abuses (both real and imagined), and lost my temper on a few occasions when the topic was mentioned. I believed myself above the “spiritual pygmies” whose talk centered solely around the second coming.

It took the obvious concern of Scripture and the intense desire for Christ’s return by believers more mature than myself to make me re‑evaluate. What I “discovered” wasn’t as much a revelation as a missing chunk of my Christian life.

The reality of Jesus’ return, that he might come at any time, has helped me hunger after righteousness in a deeper way. Am I walking in purity? Have I been talking with and listening to the Lord through prayer and reading his word? Am I walking in obedience to his commands? “And now, little children, abide in him, so that when he appears we may have confidence and not shrink from him in shame at his coming” (I John 2:28),

His coming doesn’t negate, but rather reinforces, my responsibility to care for others’ spiritual and physical welfare. Timothy received this commission: “I charge you in the presence of God and of Christ Jesus . . . by his appearing and his kingdom: preach the word, be urgent in season and out of season, convince, rebuke, and exhort . . . always be steady, endure suffering, do the work of an evangelist, fulfill your ministry” (II Tim. 4:1,2,5).

When discussing his return with the disciples, Jesus stressed one point more than any other; to watch and be ready. Luke 12:35‑38 mixes the two elements of parable and straight talk: “Let your loins be girded and your lamps burning, and be like men who are waiting for their master to come home from the marriage feast, so they may open to him at once when he comes and knocks. Blessed are the servants whom the master finds awake when he comes; truly, I say to you, he will gird himself and have them sit at the table, and he will come and serve them. If he comes in the second watch, or in the third, and finds them so, blessed are those servants!”

We are Jesus’ servants, not just any servants, but special and beloved. If our master is soon returning, what will our reaction be? Apathy? Sitting on the couch staring at the doorknob? No! Our reaction will be a fervent expectancy and preparation. Each day that we pray for his return and our meeting with him face to face, we should use our time more diligently, witness more boldly, give of our possessions more generously, and serve others willingly.

Okay, I’m done being angry. Rather, I want to see in my life the fruit of meditating on his return. I want to serve Jesus as he served his Father, desiring only the Father’s will. I want to battle evil in all its guises, especially those within myself, and also the injustice a godless society levels on its weakest members. I want to witness to the fact that God is moving, and though no man knows the hour, many feel that the right season has at last come.

I want my heart to always be looking up as I press on, rejoice that God is real, that he controls history from beginning to end, and he is my God, coming for me out of love. Come quickly, Lord Jesus! It won’t be long . . . *