About Earthquakes: Some Fun with Prophecy and Science 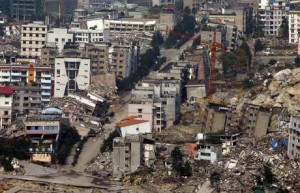 My wife and I regularly talk about the Bible, current events, and how the two intersect. So while watching a program about natural disasters on the National Geographic Channel, my beloved turned to me and asked, “I wonder if there have been more earthquakes recently than there used to be.”

Ha. Being a good (well, mediocre?) Bible student, I knew what she was thinking. A quick Bible search reveals the key verses:

“When you hear of wars and rumors of wars, do not be alarmed; this must take place, but the end is still to come. For nation will rise against nation, and kingdom against kingdom; there will be earthquakes in various places; there will be famines. This is but the beginning of the birth pangs.”

The above from Mark Chapter 13:7,8 is a conversation between Jesus and the disciples about his Second Coming (also appearing in Matthew 24:7 and Luke 21:11). Folks often interpret the phrase “there will be earthquakes in various places” as meaning there will be more or a special type of earthquakes. And that’s why my wife asked me, the family “Google it” addict, the question.

So… ARE there more earthquakes now than there were in the past? Already dubious of the idea due to the ambiguity the verse in question presents, I was a bit surprised to learn initially that indeed, more earthquakes overall have been reported in modern times than in the past. Skeptical me… about to have my doubt on this story… shaken?

In 1931, there were about 350 stations operating in the world; today, there are more than 8,000 stations and the data now comes in rapidly from these stations by electronic mail, internet and satellite. This increase in the number of stations and the more timely receipt of data has allowed us and other seismological centers to locate earthquakes more rapidly and to locate many small earthquakes which were undetected in earlier years. The NEIC now locates about 20,000 earthquakes each year or approximately 50 per day. Also, because of the improvements in communications and the increased interest in the environment and natural disasters, the public now learns about more earthquakes.

In a fact further underscoring the essentially static nature in the average number of earthquakes, we’d expect the number of large earthquakes to remain more or less constant. Why? Well, the large ones usually don’t need seismographs to detect. All one needed were people close enough to feel the tremors. And sure enough…

So I turn to my Dearling and say, “Skepticism wins again.” This time, as in many others, I personally think the skepticism is rooted not just in science but also in the Scripture passage itself. There’s simply not a mention of an increase in earthquakes there, despite the many “Second Coming” websites that tout the alleged fact of increasing earthquake activity as a sign we’re in the end times.

I’m a thoroughgoing supernaturalist, and believe the Gospel is not just beautiful and astonishing; it is truth. That said, the theological need to find in every current event a “sign” for Christ’s return is, though understandable, highly unfortunate.