Again The Electric Chair!? – Tennessee is Wrong to Re-institute It 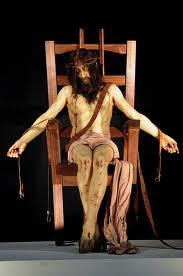 So… when lethal injection doesn’t work due to the drugs being “unavailable” (due to companies not wanting their product linked with state-sanctioned murder)… Tennessee has now made using the Electric Chair mandatory. You know, that vicious obscenity that is a proven torture device? Seven other states — Alabama, Arkansas, Florida, Kentucky, Oklahoma, South Carolina, and Virginia, still authorize use of the electric chair in special circumstances. But only Tennessee now mandates it when other execution options are unavailable.

Let’s review exactly what happens when a prisoner is subjected to death by electrocution.

For execution by the electric chair, the person is usually shaved and strapped to a chair with belts that cross his chest, groin, legs, and arms. A metal skullcap-shaped electrode is attached to the scalp and forehead over a sponge moistened with saline. The sponge must not be too wet or the saline short-circuits the electric current, and not too dry, as it would then have a very high resistance. An additional electrode is moistened with conductive jelly (Electro-Creme) and attached to a portion of the prisoner’s leg that has been shaved to reduce resistance to electricity.

The prisoner is then blindfolded. (Hillman, 1992 and Weisberg, 1991) After the execution team has withdrawn to the observation room, the warden signals the executioner, who pulls a handle to connect the power supply. A jolt of between 500 and 2000 volts, which lasts for about 30 seconds, is given. The current surges and is then turned off, at which time the body is seen to relax. The doctors wait a few seconds for the body to cool down and then check to see if the inmate’s heart is still beating. If it is, another jolt is applied. This process continues until the prisoner is dead. The prisoner’s hands often grip the chair and there may be violent movement of the limbs which can result in dislocation or fractures. The tissues swell. Defecation occurs. Steam or smoke rises and there is a smell of burning. (Hillman, 1992 and Weisberg, 1991) U.S. Supreme Court Justice William Brennan once offered the following description of an execution by electric chair:

…the prisoner’s eyeballs sometimes pop out and rest on [his] cheeks. The prisoner often defecates, urinates, and vomits blood and drool. The body turns bright red as its temperature rises, and the prisoner’s flesh swells and his skin stretches to the point of breaking. Sometimes the prisoner catches fire….Witnesses hear a loud and sustained sound like bacon frying, and the sickly sweet smell of burning flesh permeates the chamber. (Ecenbarger, 1994)

At postmortem, the body is hot enough to blister if touched, and the autopsy is delayed while the internal organs cool. There are third degree burns with blackening where the electrodes met the skin of the scalp and legs. According to Robert H. Kirschner, the deputy chief medical examiner of Cook County, “The brain appears cooked in most cases.” (Weisberg, 1991) [Death Penalty Information Center.]

The Death Penalty is the clearest evidence ever that too many Americans see themselves as morally perfect beings. Dispensing death to a prisoner — even one who him or her self has murdered another human being — is to participate in a culture of death rather than a culture of life. Christ was executed, and every one of us is guilty for that. We are without moral excuse for supporting the death penalty. Jesus, dealing with judgment on a death penalty case others thrust at him, put it succinctly: “Let him who is without sin cast the first stone.”

By that measure, it is obvious who does — and does not — have authority to execute another human being.

Corrections made: changed number of states where electric chair is still available.