Are Larry Tomczak and Charisma News Pimping for the Christian Right?

“Do not question others’ faith just because you disagree with them. It adds nothing to the discussion and only causes strife.” – Charisma News comments guidelines

“President Obama…. Would you allow me to share with you that I and scores of others have serious doubts about your conversion and the authenticity of your Christianity?” – Charisma News editorial (emphasis in original)

“Are Larry Tomczak and Charisma News Pimping for the Christian Right?” Rude headline of mine, isn’t it? Okay, it was a “get folks to read this” gimmick, I admit it. But it’s also a tongue-in-cheek way to respond to a much ruder, not at all tongue-in-cheek headline: “President Obama, We Still Want to Know if You Are Really a Christian.” 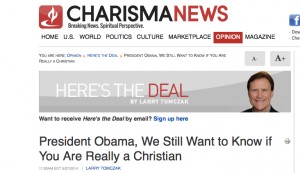 That title and “open letter” styled editorial appeared in Charisma News (May 27 2014). Larry Tomczak authored the piece. Tomczak is a Catholic Charismatic and author of the Jesus-movement era book Clap Your Hands and more recent Right Wing scree The Real Deal.

The editorial’s tone and title reek of super-spiritual condescension.

President Obama, on this Memorial Day 2014, you and your fellow Americans paused to reflect on those who paid the ultimate price for the USA. Would you allow me to share with you that I and scores of others have serious doubts about your conversion and the authenticity of your Christianity?

Weird segue from Memorial Day to Obama bashing. It gets worse.

A changed life is at the core of a genuine conversion experience. This is what separates the authentic from the counterfeit when so many Americans—some polls say 80 percent—profess to be Christian, yet something seems terribly amiss as we survey our society today. And with all due respect, that’s where I and countless others find ourselves sincerely questioning your stated spiritual identity of “I’m a Christian.”

So… there are “Christians” and then there are the REAL Christians… and we know who they are, right? RIGHT? Nudge, nudge. Wink wink. And then there’s this.

Mr. President, as multitudes observe you, you seem to be under a heavy burden and striving to make things happen through the power of your own will, through clever obfuscation and through manipulation of the masses.

I must alert you, as Jesus did those to whom He preached, that it is wise to first “count the cost.” There are many positions you hold that are totally incompatible with biblical teaching, no matter how many liberal Bible scholars have told you otherwise. These positions will have to change if you follow Jesus and obey His Word. 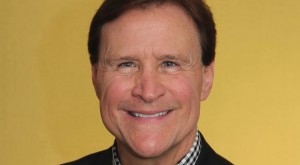 Let’s review a few facts… hopefully without the content-empty super-spiritual patina Mr. Tomczak adopts above. I admit, unlike Mr. Tomczak, who I am. I am a mutt Christian disgusted utterly with what appears to me the political virus filling the Body of Christ in America with a dis-Graceful disease. I’m not — or trying not — to couch my criticisms within a pseudo-objective sounding “higher than thou” bible-speak. And, as Mr. Tomczak obviously is but won’t admit to, I am angry and offended. Not at the President, however. I’m angry and grieved at what both Evangelical and Charismatic Christianity – white Evangelical and Charismatic Christianity, anyway — are in danger of becoming in America.

Larry Tomczak is heavily involved in the Christian Right, and it is nearly impossible to find any lengthy article by or about Mr. Tomczak which doesn’t have in it words belittling President Obama (or in various cases other Democrats). The Washington Times notes his son Justin has served (among other things) as political director for the re-election campaign of Sen. Saxby Chambliss, Georgia Republican. While none of this is immoral or unethical on the face of it, Mr. Tomczak’s own framing of Christianity must be understood as one rooted in an extremely Right Wing worldview.

For instance, while President Obama is castigated for abortion (even though under his tenure abortion rates have fallen) and for supporting gay marriage, Mr. Tomczak’s only mention of the poor is indirect and comes when he also bashes the President for Health Care Reform. As numerous biblical commentators have noted, biblical teachings regarding poverty are found in nearly every book of the Bible. Teachings specifically on homosexuality are found in very few by comparison, so why the emphasis on one issue and the nearly complete silence on the other?

And how can Larry Tomczak, who says he suffered so much at the hands of fellow believers, turn around and attack another professing believer’s very faith itself? His involvement with co-founding Sovereign Grace Ministries — and subsequent marginalization by that group — should, one think, equip him with more charity toward others than that exhibited in his barely-disguised dechristianization of President Obama.

It is astonishing that Mr. Tomczak usurps the role of God Himself and adjudicates President Obama’s faith. Oh, he’s careful to avoid appearing to do so… but the title itself as well as various one liners throughout the article give the game away. This paragraph, for instance, in which the super-spiritual veneer slips nearly completely off:

One senior commentator stated, “Obama has told more whoppers than Burger King has sold!” Maybe this produces a laugh, but the tragedy is watching your credibility disintegrate daily while watching you squirm uncomfortably behind your podium. The majority don’t see you as trustworthy anymore, and this is a terrible reflection on your so-called Christian testimony.

Again, bolding in the original! So-called… yes, indeed. So-called Christian testimonies… let’s talk about those. Let’s talk about a man and a publication — Mr. Larry Tomczak and Charisma News respectively — willing to pretend they are passing judgement on no one while doing the exact opposite.

Do Mr. Tomczak and Charisma News really think we are collective idiots? Did you really think we wouldn’t see though this exercise in rhetorical gawd-talk? They have — again — married the “Christian Agenda” to only two main issues: abortion and homosexuality while Jesus never directly mentions either of these issues. Scripture mentions one of them… rarely. The other can be read there by inference. But neither of them comes within light years of the number of times “the least of these” (Jesus’ words describing the poor, the prisoner, the widows and orphans in distress) are discussed in Scripture. Nothing? Not one word on those issues? Oh, yes… they did bash the President’s Health Care Plan, which of course did aid the least of these.

And as the editorial progresses, the gloves come off.

Here’s the Deal: Mr. President, examining your beliefs, policies, social leanings and character lead us to this reasonable conclusion.

That conclusion is left unspoken. We get it. And so did the folks who commented there get it. Some of us didn’t like it. A very articulate and bible-verse filled comment made by one of my face book acquaintances, John David Gordon, was deleted by Charisma. (My own longer comment was also deleted, not surprisingly.) Comments not deleted, however, read like this:

“He wears a ring, has worn it since college days, it takes the place of a wedding band, it says “There is no god but Allah”

Untrue, ya think? Cure your Islamophobia here: snopes.com. Facts do matter. Yet numerous identical reposts by the same poster regarding various alleged quotes in which the President admitted he was Muslim (all the quotes are out of context and / or outright fabrications… folks really should check Snopes.com more often) are left untouched by Charisma News.

In short, Charisma News and Mr. Tomczak owe the President an unqualified apology for what is overtly unbiblical behavior. Otherwise, I personally will have to consider both sources “unchristian” in the limited sense of unreliable, biblically or factually speaking. I recommend Christian resources I can trust. It is obvious that as of now, I cannot trust Charisma News to offer either the “Charism” or the “News” accurately.

I believe, and President Obama himself has admitted, that he has not always succeeded as a leader. But I also believe he has worked his heart out trying to be a leader with moral integrity and there is evidence indeed of his Christian faith. How? In the ways he relates to others, in the questions he asks of both us and himself, and in his relentless (to me astonishing) optimism. In the face of such loathing from certain elements of American society, he continues to radiate just what those first campaign posters offered: Hope.

So how appropriate, then, to allow the President the last word about his faith. First, a printed version of an early response the President (then only a Senate candidate for Illinois) gave an interviewer:

Did you actually go up for an altar call?

So you got yourself born again?

Yeah, although I don’t, I retain from my childhood and my experiences growing up a suspicion of dogma. And I’m not somebody who is always comfortable with language that implies I’ve got a monopoly on the truth, or that my faith is automatically transferable to others.

And his words on religious freedom, from this year’s National Prayer Breakfast: