“My spiritual pain is unbearable. I keep having the same unsolved question: if my rifle claimed people’s lives, then can it be that I… a Christian and an Orthodox believer, was to blame for their deaths?” — Mikhail Kalashnikov

Not long before his death in December 2013 (he was 94), Mikhail Kalashnikov, inventor of the AK-47 rifle, wrote a letter to the head of the Russian Orthodox Church agonizing over his own role in the deaths of so many. 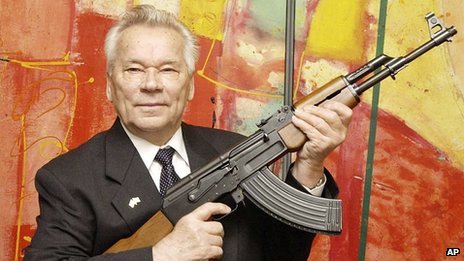 The AK-47 (Avtomat Kalashnikova model 1947) was designed during WWII by a wounded Kalashnikov, and went into mass production by 1947. Since then, it has become an enduring symbol of revolt and war across the world, with over 100 million AK-47′s believed to exist. It’s cheap and simple design made it easy to replicate by others. As a week-long BBC series noted, the rifle is iconic. In the film “Jackie Brown” one of the characters notes of the AK-47, “[It’s] the very best there is… accept no substitutes”. Revolutionaries from Che Guevara to the child soldiers of Liberia carried the rifle, making it either famous or infamous (depending upon one’s views).

“The AK-47 assault rifle is durable, simple to use, and, with only nine parts, easy to dismantle and maintain,” notes BBC-News. “It can fire 600 rounds a minute, with each bullet still potentially lethal at distances of more than a kilometre (2/3 mile).”

According to his letter, Kalashnikov became a Christian after attending a church service at 91 years of age. He had previously pushed back against any idea of being implicated by others’ use of his weapon for wrong-doing. He had, he said, invented the gun to protect his motherland. But apparently that defense was not one he himself was entirely comfortable with.

The Orthodox Church apparently defended him, saying “The Church has a very definite position: when weapons serve to protect the Fatherland, the Church supports both its creators and the soldiers who use it.”

Others of us might find the questions raised by Kalashnikov more tenable, if less comforting, than the Church’s response.

See: Kalashnikov ‘feared he was to blame’ for AK-47 rifle deaths

* We often act upon what we know at any point in time, believing that we are doing the right thing. What do the questions asked by Mr. Kalashnikov say to us about this?

* Are there past actions in your own life you then thought were correct that you, seeing their results, now question?

* Do you think the inventor of this gun shares guilt in how the gun ended up being used?