Cornerstone Classic: JPUSA Gets Caught in Chicago Snowstorm of ’79

[Historical note to this 1979 article: It details JPUSA surviving the infamous Chicago blizzard of ’79 and using it as a witnessing opportunity, and it also details our purchase of the 4707 N. Malden building (JPUSA was at this time living at 4431-33 North Paulina Street in a converted six flat).] 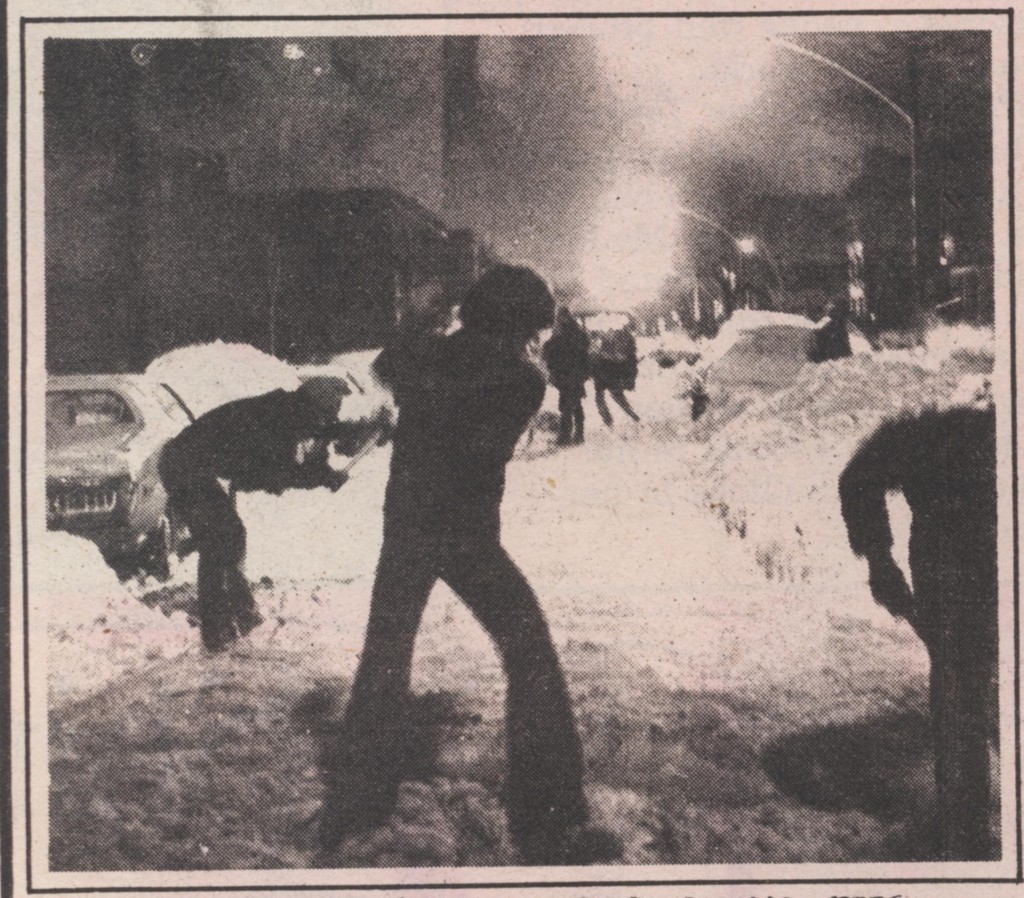 At first it was simply a lot of fun. The kids were out having snowball fights and it looked like a nice, regular snowstorm But then, the snow kept coming down and coming down. And then, it began piling and up and up….

Cars were completely packed in, streets were impassable, the elevated train system was hailed. Chicago, indeed, was immobilized. When it was all over, accumulation totaled some three feet while the drifts went as high as twelve feet.

We, here at JPUSA, just wanted to let you know that it was all true and that we will survive. We did survive ‑‑ what the newspapers called the “Blizzard of ’79.”

Seriously, though, the heavy snow here in Chicago this past January has caused everyone to slow down and count their blessings. It seems that Chicago has a minimum of snow removal equipment and frankly, it simply couldn’t handle the storm. It took a while, but day by day, conditions began improving and the city began to get back oil its feet.

During the storm, the Lord showed us a way that we could bless our neighbors; we all chipped in and shoveled out our street. For four nights in a row a team of between 20‑30 brothers per night went out and literally “tackled” our block. They dug out each car and cleared our street in many places down to the pavement. It was definitely a heavy‑duty job, especially because much of the snow was ice‑packed.

Many times we might think that a “heavy” witness is being a missionary in some far off land. Yet, for us, shoveling off the street for those we pass by every day was probably one of the best witnesses we could give them.

Also, we got a chance to play CTA ‑Chicago Transit Authority. One afternoon we were in the process of transporting our mailing staff to our house on Paulina when we encountered waves of people flagging our Jesus bus down. Before we knew it, approximately 40‑50 people quickly piled on our bus, so thankful for a ride. We rejoiced as we got a chance to sing songs and share Jesus with these people. The big, cold­hearted city had been transformed into an amiable, country village … even if just for a day.

One night returning from a Resurrection Band play, while we were rejoicing over the 100 who had gone forward at the invitation, our bus had two flat tires. It was bitter cold out and we were grateful for the shelter of a nearby subway station. As we waited our mechanics’ rescue, we sang songs of praise for our situation. The cashier in the subway gave his heart to Jesus. The Lord has more than one way to bring people to salvation.

“NEW THINGS HAVE I PREPARED FOR YOU”

A couple of years ago, the Lord gave Neil, one of our elders, a song entitled “New Things Have I Prepared for You.” Now, some of these “new things”, are coming to fulfillment.

The Lord has blessed us with a new building. It’s a 78‑room, former nursing home in excellent condition right in the heart of Uptown, the poorest section oil the north side. We plan to begin moving in oil March 1. Thanks for your prayers!

If this news isn’t enough to generate some excitement, then how about this “rev”? Our band, Resurrection Band, will he going into the studio in April to “cook out” their second album. We’ve been thoroughly blessed that the Lord is using their first album, “Awaiting Your Reply.” for His glory.

As far as other important tidbits . . . $1,300.00 was given to us by a Christian community in the suburbs to buy food to distribute in Uptown over Christmas … we sent two teams of tree planters down to Alabama and Louisiana for a couple of months of work . . . we sent a team to join in the Christian protest of the upcoming “Arms Bazaar” to be held in Chicago … we sent teams to answer the phones at the recent CBN telethon … our farm is still alive and well and some of the crew is now living in one wing of the lodge . . . we now have seven full‑time chaplains working with the prisoners in Cook County Jail … also, we have four girls going to a special school for hospital chaplaincy … our moving, painting, and carpentry crews continue to work in the city … and we will be sending down a team to Mardi Gras once again this year. Fat Tuesday is February 27.