“Do You Pay for Love?” an excerpt from Calvin Miller’s The Singer

I am daring to post this excerpt because (a) this beautiful book has been largely forgotten, (b) this might help folks to rediscover it, and (c) the message of this particular passage cannot be over-emphasized. When this book — and two companion volumes — were published in the 1970s with Inter-Varsity Press, they were favorites in the JPUSA community and among Jesus movement-era believers. From Calvin Miller’s The Singer:

Oftentimes Love is
so poorly packaged
that when we have
sold everything to
buy it, we cry in
finding all our
substance gone and
nothing in the tinsel and the ribbon.

He met a woman in the street. She leaned against an open door and sang through her half-parted lips a song that he could barely hear. He knew her friendship was for hire. She was without a doubt a study in desire. Her hair fell free around her shoulders. And intrigue played upon her lips.

“You are alone. Could I sell you but an hour of friendship?”

Deaf to her surface proposition, he said, “Tell me of the song that you were singing as I came upon you. Where did you learn it?”

His question troubled her. At length she said, “The first night that I ever sold myself, I learned it from a tall impressive man.” 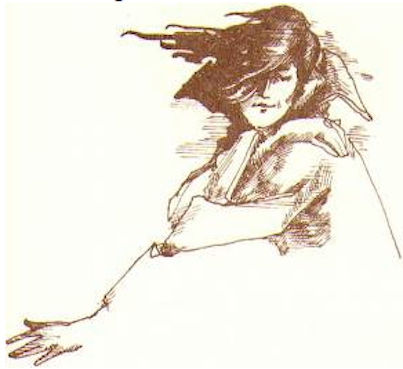 “And did he play a silver pipe?” the Singer asked.

She seemed surprised. “Do you know the man who bought me first?”

“Yes. Not long ago, in fact, he did his best to teach that song to me.”

“I cannot understand. I sell friendship and you your melody. Why would he teach us both the self-same song?”

The Singer pitied her. He knew the World Hater had a way of making every victim feel as though he were the only person who could sing his song.

“He only has one song; he therefore teaches it to everyone. It is a song of hate.”

“No, it is a love song. The first night that he held me close, he sang it tenderly and so in every way he owned me while he sang to me of love.”

“And have you seen him since?”

“No, not him, but a never ending queue of men with his desires.”

“So it was no song of love. Tell me, did he also say that some day in the merchandising of your soul, you would find someone who would not simply leave his fee upon the stand but rather take you home to care for you and cherish you?”

Again she seemed surprised, “Those were indeed his very words—how can you know them?”

“And have you found the one that he has promised?”

“And how long have you peddled friendship?”

“Some twenty years are gone since first I learned the song that you inquired about.”

The Singer felt a burst of pity. “We sometimes give ourselves to hate in masquerade and only think it love. And all our lives we sing the song we thought was right. The Canyon of the Damned is filled with singers who thought they knew a love song… Listen while I sing for you a song of love.”

He began the melody so vital to the dying men around him. “In the beginning was the song of love…”

She listened and knew for the first time she was hearing all of love there was. Her eyes swam when he was finished. She sobbed and sobbed in shame. “Forgive me, Father-Spirit, for I am sinful and undone… for singing weary years of all the wrong words…”

The Singer touched her shoulder and told her of the joy that lay ahead if she could learn the music he had sung.

He left her in the street and walked away, and as he left he heard her singing his new song. And when he turned to wave the final time he saw her shaking her head to a friendship buyer. She would not take his money.

And from his little distance, the Singer heard her use his very words.

“Are you betrothed?” the buyer asked her.

“No, but I owe it everything.”