Exit one mile—meeting temptation on the straight and narrow

Exit one mile—meeting temptation on the straight and narrow

Stop your blubbering and take a look around. Here you are, stuck in a ditch ten miles from nowhere, and you don’t even know how it happened. Or do you? Blow your nose while I explain it to you. 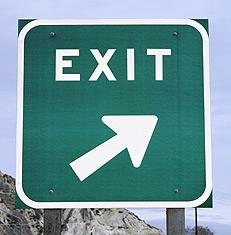 Somebody doesn’t like you driving down the straight’n’narrow, kid. Now, how’s he gonna get you where he wants you? C’mon, use your head for something besides a door jam. I Don’t know, huh? That’s okay, cause I do. He’s gonna hold out something you want, then propose a little deal.

Trouble is this deal’s a rip‑off, and if you were paying attention to the Driver’s Manual, you’d know it. There’s only three types of deals, and that’s how it’s been since the road was built. They all end the same way, too, with the sucker stuck out in the middle of nothing.

Let me spell it out. Let’s call deal number one the ”Itch and Scratch” routine. The Driver’s Manual calls it the lust of the flesh, ’cause it has to do with your body’s hungers.

Now let’s say you spot a little diner a few hundred yards from an off‑ramp. Your stomach goes, “H‑m‑m‑m. Apple pie.” Trouble is, you just ate a big lunch. You gonna scratch your itch or do what’s right? (You do look a little bloated.)

How about another example? Recall that big storm you got caught in last month? I know how it was. Rain pourin’ down, lousing up the view and ruining that brand new coat of turtlewax.

You kept thinkin’ about your cozy fireplace back home, wishin’ you’d never left. Meanwhile, this naggy feelin’ kept buggin’ you, “Don’t forget. Pay special attention to the road in a storm. Smoothy’s skulking about looking for cars to wreck.”

So you did watch for awhile, but that water kept fallin’ like Noah was about to leave again. What were you thinking? “Turtlewax, nothin’, if this keeps up I’m gonna need some oars.” There you were, grumbling against the Chief instead of watchin’ the road. Doin’ about sixty miles per, but with your brain in neutral.

Whap! You’re sittin’ in some poor cluck’s cornfield buried up to the axles. Slippery When Wet the sign said. You were too busy with Smoothy and your own flesh to pay attention to a message from the Chief. Some folks call that passivity, but where I come from, they call it sin!

Deal number two is the ”Stare and Dare” gambit‑what the Manual calls the lust of the eye, Sit there looking innocent! You know what I’m talking about or you wouldn’t be stranded out here.

What did the billboard advertise? A Mercedes maybe, or was it a vacation resort with all these beauty queens you’re called to witness to? (Sure, and I’m Whistler’s mother.)

Thought you could out‑smooth the King of Smooth, didn’t you? He put those billboards up just for dopes like you. Makin’ deals has been his racket since the roads were built, and you know where his super highway goes!

Deal Number three is the “I’m a Big Boy” gambit, often known as the pride of life.

Remember about seven hours ago you were cruising up a hill behind some slowpoke with steam pouring out of his radiator?

You wanted to pass, and bad. Didn’t think about stayin’ behind him to see if he’d need some help with that old clunker. All you were worried about was getting where you were going, and who cares about anyone else.

Alright. So you pulled out to pass. Oh‑oh, a yellow line. The Chief said stay put. (What’s wrong, Mario Andretti? Your face is burning like a stop light.)

So anyhow, you said to yourself, “Hey, the Chief wouldn’t give me this Corvette if I was supposed to go slow. I’m not called to play nursemaid to every chump with engine trouble. Besides, he might be on the straight’n’narrow but who’s to say he wouldn’t rob me blind, or at least want a ride to a gas station? Forget it.”

Don’t look so surprised‑the Chief’s got all of it down in the log.

You pulled out to pass and floored it just as you came on over the hill. And there was a semi‑truck aimed right at your eyeballs. That guy you were passin’ swerves to let you over, otherwise you’d have been kissin’ that truck’s bumper for eternity.

When the Manual says, “Sin leads to highway fatalities,” it’s not kidding.

Now don’t choke on your dentures, but that was me you passed back there. Check it out … off‑white Ford Falcon, a real vintage automobile, same one you passed. Your mouth’s hanging open. If I wanted a garage I could find a drier place than that.

Now clean out your ears for this. When you hear that voice sayin’ “Get off the road,” you ain’t sinned. Sin only starts when we listen. If we resist ol’ Smoothy, he’ll scram. Trouble is, the line between temptation and sin comes quicker than you think. Once you start listenin’ you got three choices.

The first option is the “Spinning Your Wheels” routine. That’s when you sell out

to whatever turns you on, over and over. You end up out on the flats goin’ in circles, making the same mistakes you did to start with. You might think it’s fun to see what your car can do pushed to the limit, but remember the name of the place … Death Valley. Stay there long enough and people develop these peculiar handles for you: Lush, Hypocrite, Liar, Lusto, Hubcap Swiper.

Second option I call the ”Sad But Still Bad” shtick, all remorse but no repentance. This is you right now. Don’t give me any lip! Sure you feel terrible about stickin’ that jalopy of yours in the ditch, Trouble with that, you’re not sorry about gettin’ off the straight’n’narrow in the first place.

Fact is, you’re probably wanting to give me some dense excuse for gettin’ off at that exit.

For cryin’ out loud! We could do this all night and you’d still be in this ditch come morning.

Or maybe you want to turn the gun on yourself. “Everything is my fault … I’m just no good … I’ll never change!” This is called condemnation. “I don’t even deserve to be on the road.” You don’t, but neither does anybody else.

Third option I call “Following the Manual.” Think of that sin as a big clover leaf interchange. You left the right road, and round and round you went, gettin’ further away from that straight’n’narrow every minute. Sometimes gettin’ back is almost as easy as gettin’ off was, but usually you gotta reverse what happened step by step.

That’s when you put on your drivin’ uniform. Put on your belt of truth, your vest of righteousness, and your boots that’ll floorboard it for the gospel, and keep that old relic from the chariot days, the shield of faith, so ol’ Smoothy don’t catch you with his flamin’ arrows. Put on your crash helmet of salvation and the Chief’s sword; you know, the Driver’s Manual. Then pray and keep alert (Eph. 6:10­18).

In other words, get back to the Manual, instead of leavin’ it to the cockroaches in your glove box. That’s right, read it, wha’d ja think it’s for?

Now get this, the Manual says get rid of your old nature, along with its old habits, like that “I got a ministry to beauty queens” rap. Smoothy must have invented that one before they raised the Himalayas.

Instead, maybe you oughta try takin’ that crippled kid next door, who you think is such a drag, out for a spin an’ introduce him to the Chief. You get the idea now? That’s right, put off the bad, put on the good.

Are you a liar? Start speaking the truth. Gettin’ tempted to steal somebody’s hubcaps? Do some honest work instead and help out the hungry with what you make. Got a foul mouth? Work on upliftin’ those around you with talk centered on the Chief. Got some sin you’ve never told a soul about, maybe ’cause you didn’t wanna let go? Confess your temptations (and failures) to other friends of the Chief.

Yeah sure it’s tough sometimes, but don’t you know the Chief went through a lot of the same kinda baloney, to get this thing set up? Only he didn’t end up in the ditch, so we ain’t gotta either.

Sure it’s a test, but if your eyes are in the right place, you’ll be moving through those gears like greased lightnin, and ol’ Smoothy will be snackin’ on yer dust (Heb. 4:15, 16).

So kid, keep your eyes on the Chief, and your fingers in the Manual and you’ll do alright.

Ready? Wrap this chain around yer bumper. Ah, stow it kid, ya think I ain’t gotten off the road a few times? Why, I remember this narrow bridge in the Catskills. It was the middle of winter and …*