Gangs, Violence, and Living in Uptown: One JPUSAn’s Memories, Reflections 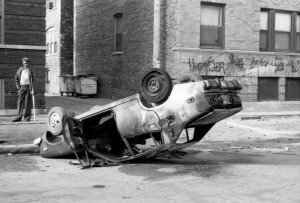 In 1978, when Jesus People USA first moved into Chicago’s Uptown after a few years in the Ravenswood community, I was one of the “single brothers” picked to move into our new 4707 N. Malden digs.

Only a few months after the move, three of us were playing cards on a hot summer night. Suddenly, we heard the unmistakable “pop pop pop pop pop pop” of a gun. I hadn’t known until that moment that I would instantly be able to identify a gun’s sound as opposed to fireworks. The gun’s coughs were instantly followed by squealing tires; the shooter or shooters quickly departed.

We jumped up and ran to our third story window at the front of the building. A woman began screaming, over and over. We saw her, kitty corner at the Leland-Malden intersection, standing over an inert form.

I don’t remember what anyone else did. I ran downstairs into the street. The woman had also left by that point, but another JPUSA member had called the police. On the pavement was what was left of a man; blood ran out from under his body and to the edge of the sidewalk, where it disappeared into scraggly shadow and grass.

There was nothing to be done here.

A policeman tried to get anyone in the growing crowd outside to speak up about what had happened. No one other than the new folks in the neighborhood — us JPUSAns — seemed willing to talk. The cop asked if someone had a phone. We led him to our lobby, and he tersely called it in. He seemed callous, indifferent even in his choice of words (“send the meat wagon”), but who could really say?

The dead man was black. As I walked back into the house a second time, I overheard a young white male say to his friend, “Don’t worry, the dead guy wasn’t white he was just a n—-r.”

It was quite a welcome to Uptown for a Montana farm boy such as myself.

Another Incident on Malden

An Appalachian gang member was brutally murdered and dragged behind the other gang’s car while dying, all this within a few yards of our front door. Denny Cadieux, one of JPUSA’s pastors, was approached by one of the victim’s fellow gang members to officiate over the funeral. Denny turned to me to sing a hymn (I think I settled on “How Great Thou Art”).

When we arrived at the funeral home, the various gang members were having photos taken next to the deceased as he lay in his open coffin (the damage done had not touched his face). I was struck by the religious poses (praying hands, closed eyes) of those being photographed, and maybe a little weirded out by the “Kodak moment” vibe of folks being photographed with a body. Yet within moments of the camera being put away, the gang members began talking loudly of their plans for vengeance.

Denny’s sermon, perhaps informed by what I’d heard, focused on “Vengeance is mine, says the Lord. I will repay.” Denny spoke of the Prince of Peace, forgiveness. But in the eyes of those young men, I saw no forgiveness. “You want us to forgive those damn Latin Kings!?” screamed one gang member from his pew, “We’ll forgive ‘em, alright!”

Denny fought fire with fire. “You want to use violence? Then know this. God will come against you. God won’t put up with it. You can’t take his power into your hands unless you want him taking you in hand.” Denny (who’s since gone to be with Christ) was a big man, with a big voice. The gang members at least listened. I remained skeptical, but then who was I to know what commerce was going on between their hearts and God’s Spirit?

Doug Chamness, a guy with thinning but very curly red hair we called “Fuzzy,” was helping unload equipment for a hard rock Xian Band from Detroit, Archangel. It was late at night, maybe around midnight. I walked into the lobby just in time to see Fuzzy come inside, supported by a few others, and lay down on a small lobby couch. Blood was seeping from between his eyes.

As the guys unloaded gear, down the block someone had fired a pistol at another gang member. They missed… the gang member, anyway. The bullet traveled the distance to Fuzzy and struck him on the bridge of his glasses, snapping them in half. The bullet, amazingly, was spent and dropped to the pavement. Fuzzy’s cut came from the broken glasses.

A young gang member, Paco, that we’d known for a long time and who was close with Fuzzy came into our lobby, anxiety all over his face. I do not remember exactly what Fuzzy said, but it was something like this:

“Paco, you see this? You see this blood? I could be dead right now. Jesus protected me tonight. But I could be dead. And if I was dead, I’d be with Jesus. Now Paco, where are you gonna be if this happens to you? You think about this, man. You keep going and this will happen to you! Or maybe you’ll shoot someone by accident, huh? You just think about this!”

This while blood is running down Fuzzy’s face. I remember thinking it was one of the more effectively illustrated sermons I’d heard.

Tony Was Not as Lucky…

Tony ran with the toughest gangs until one night a bullet found his spine. JPUSA members befriended him, a wheelchair bound young man who had apparently thrown his life away in a senseless life of violence. He was quadriplegic.

But as Tony embraced his new Christian faith, we saw him bloom into a whole person and a person whose own cautionary tale proved highly effective when talking with other gang members or those considering joining gangs.

Tony had a joy that surprised and disconcerted some but drew others to him. His bodily loss had somehow translated itself into his becoming a whole person for perhaps the first time in his life. He continued to impact the lives of others until, too soon, his body lost the fight against the damage the bullet had done.

After our 1990 move to 920 W. Wilson, a location about five blocks from the 4707 N. Malden address, we continued to see gang activity.

One day my wife Carol and I walked up Wilson west toward Sheridan. On the opposite side of the street, I noticed a fellow JPUSA and friend, Paul, coming out of our 939 Wilson address. We continued walking and were level with the Sheridan Plaza (a very large building on the corner of Wilson and Sheridan).

With no warning, I heard that unmistakable sound of a gun being fired. Simultaneously, I saw the shooter — directly across the street from Carol and I. Without conscious thought, I bodily lifted Carol in the air and flung her into a recessed doorway of the Sheridan Plaza, shielding her with my body. (This was not heroism, but does illustrate the biblical idea of a couple being “one flesh”; I was in effect protecting myself!)

Across the street, Paul flung himself between two cars — he’d been directly in the line of fire. Amazingly, neither Paul nor three or four running individuals (the presumed targets of the shooter) were struck. Nor was anyone else, thankfully.

And then there was Wednesday Night…

Carol and I were up late, sort of tired but enjoying the rain and thunder outside, when an incredibly loud series of five to six shots — seemingly directly beneath our alley-side window — boomed through the room. I grabbed my cell phone and called 9-1-1.

Unknown to me, the daughter of one of our pastors, Mindy, had just gotten out of a car in front of 920 when she saw the man with his gun. She cowered out of sight as best she could while he opened fire at others who were running apparently toward Hazel avenue. I’d been right; the man was nearly under our window — probably closer to the wall near Joan Arai public school.

Sadly, the shooting was one of two that night, both of which had victims. We got this informational email from the 46th Ward Office of our Alderman, James Cappleman, regarding the shootings:

Last night, just before midnight, two Uptown men were shot west of Truman College at 1255 West Wilson. Soon after, at approximately 12:30AM, another man from the south side of the city was shot near Uplift High School. The police believe these shootings are part of the same incident and believe they are gang-related. At this time, no one has been arrested.

The incident is still under investigation with Area 3 Detectives. Police presence has been increased in the area.

Positive loitering will occur tomorrow night, Friday, July 29, 2011, at 7:00 PM, at the corner of Wilson and Hazel. We will then walk west to Wilson and Magnolia. Please support our neighborhood by attending this event.

So… what do we do about it? The above idea, being a presence in our neighborhood that is visible and constant, is a great idea. (I’m going to go to the “positive loitering” event our Alderman mentioned.)

Reporting any activities which seem to be gang-related is a must. (The latter is a delicate business, as young males doing nothing but having fun are easily misidentified as being a “gang” of the destructive variety…. all we can do is try to discern the difference.)

But there are also the infuriating larger picture issues, such as America’s love affair with firearms, handguns in particular. Chicago tried to clamp down on handguns, but was overruled by the high courts of the land. So do we just give up on regulating firearms in any way? It seems so, and that is disheartening.

There is the issue of poverty, esp. in a materialistic culture such as America’s which measures one’s personhood by how much bling one has. Poverty in America is a condition which nurtures despair. We cannot hope to solve the gang issue without directly addressing such underlying issues of inequity.

There is the issue of how we cultivate in the young a sense that they share in our community. One does not destroy what one values. And one values what one is allowed to share. We often aren’t sure how to draw the young, esp. those who are among disenfranchised minorities, into the mosaic of our community. But maybe we don’t have to be sure how in order to at least try. Uptown is more fortunate than many communities in that regard, as we have many social service agencies with many creative and caring people involved. Individuals from varying religious and political backgrounds also care and involve themselves.

There is an issue of blame. Unfortunately, in Uptown it is often the homeless who are blamed for gang activity, despite virtually no statistical connection between the two. Most homeless shelters (including JPUSA’s) have close and constantly updated information-sharing links to the police regarding not only wanted gang members but also sex offenders and others with criminal records.

I live in the city, not on a Montana farm or in a suburb (though gangs aren’t completely unknown there, either). The dangers I face living here are statistically speaking small… but not acceptable. Neither are unethical shortcuts to solving those problems. Rather, a united community working as one can at the least lessen the likelihood that — one more time — we are awakened by that unmistakeable “pop pop pop pop” that may signal the ending of another irreplaceable life.