“Love Yourself”: an Existential Meditation Inspired by Gabriel Marcel 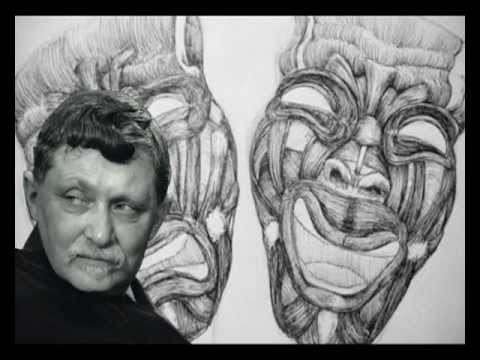 “…to have a self, to be a self, is the greatest concession made to man, but at the same time it is eternity’s demand upon him.”
– Soren Kierkegaard, The Sickness Unto Death

This morning my dearling Carol read to me from a book by William Backus, Christian psychologist and faithful friend until his passing last year. The book’s title, Telling Yourself the Truth, promises a lot. Even though it is someone close who wrote it, I found myself skeptical as my wife began reading.

Backus’ thoughts suddenly intersected with thoughts of quite another stripe coming from writers he’d probably not have had much affinity with, but whom I’ve increasingly read as a starving man might wolf a loaf of freshly baked bread. These writers – Kierkegaard, Gabriel Marcel, Pascal, Walker Percy, Dostoevsky, Mauriac, even Dietrich Bonhoeffer – deal with self-anxiety (dread) in the only way that resonates for me truly. They are, to varying degrees, known as “existential” writers, though less often quoted as existentialists than are their non-christian counterparts, Jean Sarte, Jaspers, and such.

The point of intersection came as my wife read. To love yourself, Backus bluntly asserted, is a necessity, not a sin. He explores the Christian ideas on self-denial (which have real merit) and explodes the idea that self-denial and self-hatred are the same thing. As Carol read, I agreed heartily with what he was saying.

But my mind, the undisciplined thing, smelled a rabbit trail and before I could stop it was running down it. And I “heard” the words of Gabriel Marcel in particular…

It suddenly occurred to me that Backus was saying (or at least implying) that “Love yourself” is a command. And two thoughts arrested me at this.

First, before one can obey the command, one has to know what both words in it actually mean. And second, to obey a command is to recognize that the one issuing the command has authority to issue it.

I consider the first point central in my attraction to existential thought. (And remember, please, that my mind-heart is a very little dog functioning mostly on the level of tenacity rather than strength, and yip more than bite.) The issue of what “love” means is important enough… but before one can even get there, the topic of “self” must be settled.

Gabriel Marcel emphasizes that a self has, in a real “concrete” sense, two selves to cope with. There is the self that is, and the self that attempts to identify the self that is. My terms: a present self and a perceiving self. Marcel is said to have had folks hold their two hands out in front of themselves, and then had them “touch your hand.” Which hand is touching? And which is being touched? The issue quickly becomes ambiguous. Of course, the analogy being an analogy breaks down. Both hands are doing both, a wag might answer. Ah. But in the case of the self, is it that simple? Another way of seeing it is to look at one’s body as “myself” and yet “other.” It is my body, my self. And yet it is an object, a “thing” which I can tattoo or bathe or injure. When I love my body, am I loving myself? When we say we have a soul (providing we believe such a thing), is this “soul” also myself? Am I loving my soul, or spirit, when I love myself?

Marcel’s refusal to let things be reduced to the abstract is central in this thinking. As the coiner of the word “existential” to describe this way of seeing, Marcel called his own path the philosophy of the concrete. That is, a way that emphasized the reality of personal consciousness, and the anxiety produced by this personal consciousness, was to him and those like him the only place where philosophy could or would make any real difference. Of the self he wrote:

“If the self that I am is construed as a subject, a subjective reality, if the ‘I’ in ‘I exist’ is identified with this subjective reality, then the assertion cannot stand up under scrutiny. What justifies the assertion, the criteria of validity, cannot be determined. The assertion ‘I exist’ is valid only if it signifies, in an admittedly loose and inadequate way, an original datum which is not ‘I think’ nor even ‘I am alive,’ but rather ‘I experience,’ and this expression must be accepted in its maximal range of indefiniteness.” [Creative Fidelity, “Incarnate Being.”]

Marcel’s answer in defining the self, I admit, is vague. This is annoying, but understandable, since he admitted early on that such answers are mysteries. But he doesn’t leave us in some sort of philosophical cul-de-sac. At least, I don’t think he does. Rather, he leaves us in a place where rationalism fails, as it most transparently has in our day though less so transparently in his. What is left is antinomy – apparent contradiction – and a conception of self that needs existence, that is, the world as it is, in order to be true (or rather, to truly be).

Where, then, is love left in this rather squishy (rationally speaking) conception of self? There are at least two conditions my small-dog mind-heart finds in Marcel that greatly help me in comprehending love, and self-love.

First, the problem of identifying the ‘I’ self is not unique to itself. That is, identifying the ‘thou’ self is also a search that cannot be answered with abstractions. It, too, needs the “concrete” treatment. Marcel speaks of objectifying the other by failing to existentially know him. The only way to make the unnamed other into a “thou” is in an act rather than abstractions:

“…[W]hat does it mean to say that the thou as such, is or is not, real? …. What is relevant rather, is the act by which I expose myself to the other person instead of protecting myself from him, which makes him penetrable for me at the same time as I become penetrable for him.” [Creative Fidelity, “Incarnate Being.”]

Marcel understands that the self’s relating to this “thou” (as opposed to the rationalist “him” or unnamed other) is similar to how the ‘I’ must relate to self. In a real sense, then, loving one’s neighbor is not only similar to loving oneself… it actually overlaps with the latter.

“As to self-love, it is easy to discern the complete opposition which exists between an idolatrous love, a heauto [self]-centrism—and a charity toward oneself which, far from treating the self as a plenary reality sufficing to itself, considers it as a seed which must be cultivated, as a ground which must be readied for the spiritual or even for the divine in this world. To love oneself in this second sense is not the same as self-complacency, but is rather an attitude toward the self which permits its maximum development; it is clear that there is an infatuation which is in itself unfavorable to the development of any truly creative activity whatever; I do not limit myself in this context to artistic or scientific creation since I speak also of the radiance shed by any generous soul. On the other hand, it can be assumed that a harshness or an excessive malice towards oneself can also be paralyzing although for inverse reasons; hence there is need for patience towards oneself, a patience that may be reconciled with complete lucidity and which has been recommended by several teachers of the spiritual life, by a St. Francois de Sales, if I am not mistaken. However this is possible and meaningful only when the distance from and nearness to the self which define the act of charity, are realized in and relative to, oneself. In practice we usually sin because of our inability to see ourselves, or—less often if we have managed to reach such objectivity—through our failure to maintain that contact with ourselves that we should always have with our fellow-man.” [Creative Fidelity, “Incarnate Being.”]

Living in an intentional community of Christians, I deeply feel this strange overlap between my own ‘self,’ the ‘thou’ selves of others, my temptation to make them into objects (the ‘him’ or even ‘it’). What Marcel is getting at is the need for me to cease the objectification of others, because as I objectify them, I also end up objectifying myself. There is, I most strongly suspect, an undeniably, indissoluble linkage between loving myself and loving my neighbor, yes, even loving my enemy. Each feeds into and is nurtured by its corollary; the two are often indistinguishable.

I believe that in Marcel’s formulation – if one can call an existential ‘concrete’ philosophy a formulation! – love’s definition becomes transparent. Like his mentor Francois Mauriac, Marcel never forced his Christian faith into what he was, or said, or wrote; it simply was there to be taken with the rest or dropped by the wayside.

But in his attempts to make of the self more than a proposition, an ‘it,’ he finds in Christianity the ultimate source:

“If what I have said is true, a philosophy of transcendence must never divorce itself even in principle from a type of reflection which is directed on the hierarchy of the various modes of adoration, culminating not in a theory, to be sure, but rather in an understanding of saintliness; a saintliness apprehended not as a way of being, but as something given in the purest form in its intention. The fact is that it is here and here alone that the problematic is overcome, and that in such a life the imminent presence of death is abolished in the fullness of being itself. The fact that this saintliness, realized in some individuals, in some witnesses spread out over the centuries, is not felt to be an unnatural and outrageous anomaly by a weak humanity; that it evokes certain echoes in our hearts, that it is for the indecisive mind a permanent stimulus to judge oneself and to hope—this certainly is the second datum which allows us to perceive in the saint—just as we perceive in the inspired creative individual on another level—the mediator of Him who no advance in technique, in knowledge or in what is called morality, will ever bring nearer to the individual who appeals to Him from the depths of his suffering.” [Creative Fidelity, “The Transcendent as Metaproblematic.”]

That last sentence, which echoes non-christian (to my knowledge) post-modern authors such as Richard Rorty, reverberates for me as one the identifying marks of a Christian. To the degree I fail at understanding suffering – both my own and others’ – I fail to allow He Who is Love to continue in the work of conforming my ‘I’ to His ‘I.’

[This is no completed set of thoughts, but rather very much a work in progress. Comments from my philosophical and existential elders are welcome, as are comments from anyone else.]