Professor of Philosophy Adriel Trott, who as a sideline happens to be my niece, is very patient with me and my continual dialogue regarding feminism. Patience is needed, because while I find myself still hashing out what Second Stage feminists fought through, Dr. Trott and her compatriots are post-Third Stage pioneers re gender identity, intersectionality, and ever so much more.

Oh. And there is that little issue of her being a woman and me very much a big white male. 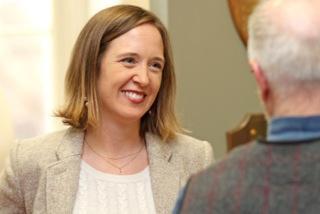 Dr. Trott’s blog, The Trott Line, recently featured a provocative notification that for 7 Days, she had interacted only with women in social media. Her reasoning did not include man-hate or any derivative thereof:

“I have long felt like social media is a man’s world.  Men get all the privileges they get as men, but it feels amplified on social media.  My experience of social media in general is that men can say things that get taken as definitive, while women are asked to explain and justify.  Men say things about their difficulties in any particular area of their life and it is taken as an expression of their reflective capacities, but when women express such difficulties, it is taken as a moment to offer advice.  I don’t have the data (a. I would love to see such work being done and b. I think the call for data in response to this expression of my experience is in a sense part of what happens to women on the internet–we call it gaslighting when experience is not to be trusted), but my experience on the interwebz is that it’s a hard place to be a woman, especially a woman in philosophy.”

Dr. Trott then goes on to underscore what she learned in just seven days… and it was painful for this man to read. Picking out only her bullet points (despite the fact that one *really* should read her entire post):

1. There are not that many women on social media.
2. Men seem to think I need advice about things in which I am an expert.
3. Social media seems to develop hubs of engagement that are dominated by men.
4. Men engage solely with other men about issues relating almost solely to women on the regular.

Now, it may seem odd that Dr. Trott found these conclusions while *not* interacting directly with men. Again, read her article for why… the reasons are compelling and I had no argument with any of ’em.

I responded to Dr. Trott on her page by asking (short version) what we men could do about it. She kindly but firmly responded (short version) that it wasn’t up to her or women in general to help me figure that one out… “The ball,” she seemed to be saying, “Is in your court.”

Now I admit initially that was just a little brusque for me. My lil’ male ego had been rebuffed, right when I was trying to be all helpful and feminist and “a man who listens” and stuff! (Need some Kleenex?) But there is a more serious reason than those I really do hesitate here… and that is that when the privileged person tries to speak into the less-privileged person’s situation, the result is often not good and can even exacerbate what already was bad.

All that said… I’m taking Professor Trott’s adminition at face value. I’m going to risk being a big white male idiot by offering possible correctives, aimed completely at myself and my fellow males, regarding opening social media (and conversations in general) to women. I will use Dr. Trott’s own points, then head off in my own dubious direction(s). Except point one, which must constantly be referred to…. and point six, which underlies (I think) the whole works.

In conclusion, I’d ask for *women* in particular to respond to both Dr. Trott’s and my own posts… in my case with whatever corrections or additions seem appropriate. There is one equation I’d like to leave us all with… and that is the (I believe) biblical concept that when a person is truly disempowered, God commands those around her to reverse that process, restoring her sense of self-identity and self-purpose. When a person is empowered — especially when that power is given at the expense of others — their primary task is to (a) use said power to empower others, but (b) invariably to disempower oneself to whatever degree is possible. That’s far too deep for a concluding paragraph, and probably too deep for this shallow soul.