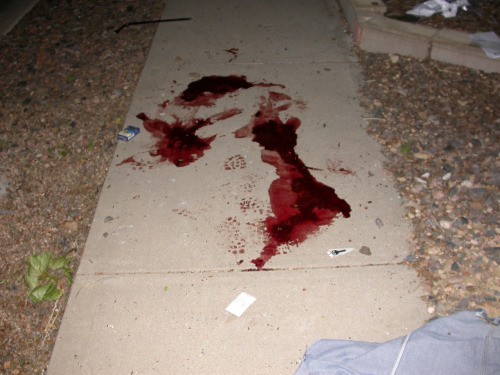 Easy enough to conceal
who you are with the hip-carried friend
Sending someone else far away from
this place, this life, their universe of time
and rhyme gone — snap — watch it congeal
on the sidewalk near
Leland and Malden
I heard the bang-bang-bang-bang-bang
And the girl start screaming that
they shot her baby as I went to the window
and then down to the street
crazy enough to go outside cuz I
forgot myself in hoping the dude was still alive
Not lying there like he was all five inside
and his life thick and sticky on the cement

Some white dude says to me, being
Anglo and therefore *on* *his* *side* — he thinks
“Just another nigger – no big thing.”
And the NRA Squad took off in a car, gone
And the screaming girl disappeared quick
And the cops came, wrote some stuff down,
talked to people who wouldn’t talk, and to me,
who would talk but didn’t know anything, and left,
And the body of someone wrapped up
to hide our faces, not his, put into an ambulance
He’d already taken the ride and
None of us knew, him — he was gone
Though that sidewalk blood stain kitty corner
from where I lived stayed there for most
of the summer
Til the Chi-town Uptown winter rubbed it out
And I’m still wondering — who’s side *am* I on?

You the NRA Death Squad
Who are you and where do you crawl?
You pay them like your dealers
To supply the needle and syringe
Plenty of needles fit the clips
And the bananas empty easily
as flicking a finger and the worlds pass by
In an alley as you lure and
blow eight holes through an eight year old to
Get back at his daddy
And somehow this makes sense to you
Dear Jesus they keep humping violence
Like it’s their first time, even though
their eyes are glazed over as bored
as a prize stud seeding mares for cash
After a while they just keep his seed
in a jar and make little killers that way
“It’s no real pleasure in life.”

You the NRA Death Squad
I remember watching that decrepit old man
“Pry this gun from my cold dead fingers”
Well he went not with a bang but a whimper
And you kept selling, you wrinkled farts
You half-oink red-neck punks in your Benzes
Rakin’ it in on the down-low front to back
You give it us barrel-first and say
Trayvon shouldna stood his ground, for sure
but you will stand yours with hips and clips
and loaded credit cards microchipped
And the horses keep running for ya cuz
you have a thing for the ponies.

I can’t unremember that nameless one
Didn’t even make the papers, just a banger
got what he deserved the permanent check-out
Over on Malden and Leland in Uptown
The place where white trash and black punks and
Jesus freaks and sixties lefties try to push back…
He never even knew how to push back.

The NRA Death Squads are going to have to go
in order to form a more perfect union the
second amendment must be unamended,
the love of the metal dick of death be upended,
the stone over that boy’s head offended
Suspended in disbelief I am as I stand my ground
with no weapon in hand and tell you
It is either you or us who will inherit this land.