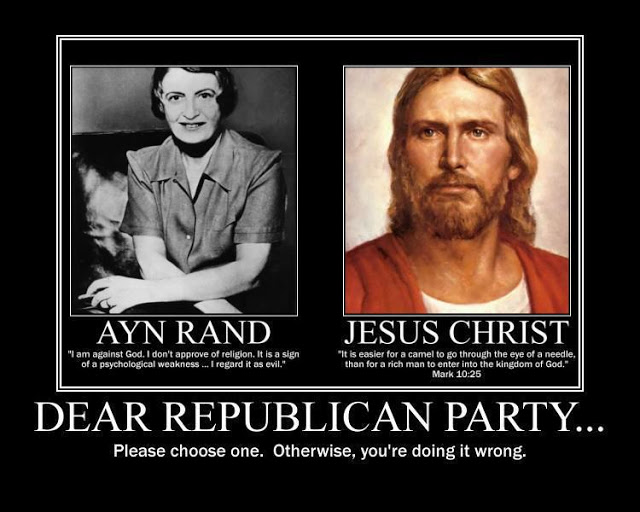 Salon magazine these days tends to major on Shrill. But that major caveat aside, their recent “The right’s Ayn Rand hypocrisy: Why their ‘religious’ posture is a total sham” carries real weight. Despite the Shrill.

Earlier this week, CNN reported that American Atheists, an advocacy group for atheists and atheism, would have a booth at the 2014 Conservative Political Action Conference [CPAC]. The idea behind the booth was to build bridges between historically faith-motivated conservatives and their politically aligned but religiously different atheist counterparts. David Silverman, the president of American Atheists, called the booth “one of many steps” his organization would take in its “outreach effort” targeted at political conservatives.

Well, surprise. The Atheists were suddenly disinvited. Which led Salon to ponder this:

[I]f the American Atheists’ goal is to make public quiet inklings of atheism in seemingly faith-saturated conservative circles, an incendiary conversion attempt based out of a booth at CPAC is likely the worst tack to take. After all, a much more successful war against religion on the right has been waged by none other than perpetual philosophical train wreck and failed film critic Ayn Rand.

Rand is perhaps the only virulently anti-Christian writer that Republicans nonetheless routinely feel comfortable heaping praise upon. In a charming 1964 interview with Playboy, Rand described the crucifixion of Jesus in terms of “mythology,” and submitted that she would feel “indignant” over such a “sacrifice of virtue to vice.” That Christians are called to care for the most vulnerable of God’s people was, to Rand, manifest proof that the religion has nothing constructive to add to human life: After all, in her philosophy, “superiors” have no moral obligations to those weaker or more vulnerable than they. According to Rand, the Christian moral imperative to serve the needy is a “monstrous idea.”

So… while there’s plenty of Shrill to criticize in Salon (not a disease peculiar to them, by the way)… there’s also a potent critique — one I have repeatedly raised as well. Why do Christians align themselves with the party of Ayn Rand? It is just a question. Read the article and get back to me if you figure out an answer.