The Bee in Every Blossom (for Zora Neale Hurston) – Black Writers, part 2

I promised I’d try to do better by African American women in the literature department. And in the process, I seem to have rediscovered an incredibly powerful voice that for me may end up a star in my personal galaxy. I’d seen the movie of Zora Neale Hurston’s Their Eyes Were Watching God and also read various bits of her writings over the years. But pondering her this year brought a deeper realization of just what powers of description — both of nature and of the inner human terrain — she uniquely possessed.

* A short but good biography of Zora Neale Hurston.
* More on her probably most famous novel, Their Eyes Were Watching God.
* And the 2005 movie (by the same name).

And… here’s my pathetic little homage to her. In it I attempted to borrow some of her own images and reflect them very imperfectly back.
–+– 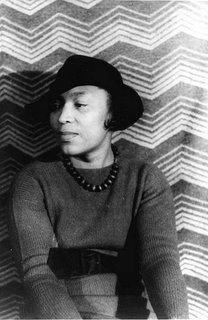 The Bee in Every Blossom (for Zora Hurston)
by Jon Trott

“I did not just fall in love, I made a parachute jump.” – Zora Neale Hurston

The spices hang about you, girl
Like dark skin, exotic clothes
A heart / mind kind of fusion
Both as sharp and true as swords.