The Tragedy of 9/11 and the Horror of Righteous Certainty

The below editorial was written in 2001, soon after the events of 9/11, and published in Cornerstone magazine.

“Do not bring your servant into judgment, for no one living is righteous before you.” (Psalm 143:2 NIV) 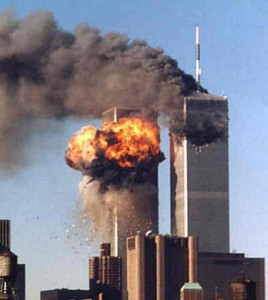 September 11, 2001, I saw the orange fireball of human righteousness. America—the Great Satan—had been dealt a crushing blow at the hands of those with a pristine vision of our absolute evil. Ponder how long, and with what patience, this group of men (some married and with families) lived among us, sharpened by purity of purpose. We can call them mad, but after all, they acted not out of madness but out of certainty. What was it they were certain of? They were certain they were right, and further, that they were the instruments of righteousness.

Of course my nation has sinned, and will sin, as all Americans (and all humans) are sinners. Our own leaders’ response so far seems to have glossed over that theological and historical reality. Yet what seemed amazing to me even as I wept with my wife over the images of thousands dying in New York, hundreds more in Washington, and the plane of brave souls in Pennsylvania, was the brilliantly simple perfection of the hijackers’ vision. Like all such perfect visions, theirs required the reduction of fellow human beings to nothing . . . to Ground Zero. Nearly seven thousand individual lives had been reduced to symbols of evil, pawns moved on some spiritualized chessboard. Yet the hijackers totally believed in this vision, even to the point of taking their own lives!

I fear such righteousness. Its footprints are all over history, all over the very faith I hold so dear. The Crusades, the Inquisition, the doctrine of “Manifest Destiny,” the hanging of alleged witches (one, Rebecca Nurse, was a direct ancestor of mine), the African slave trade—these are all acts of human beings who were righteous. Righteous, that is, in their own eyes. Whether my Savior’s name is used, or the name of Allah, or such concepts as “Choice” or “Revolution of the Proletariat” . . . all such visions are rooted in man’s righteousness, his certainty that his acts and ideas are morally pure while the history, culture, and very lives of his perceived enemies are without value.

Children are often the righteous man’s victims. They stumble through the dust of impoverished nations, starving because someone’s self-defined crusade/jihad is more important than his people. They lie beneath smashed concrete, the smell of death in the air, as their assassin praises a god of his imaginings that his mission was successful. Their corpses are dumped behind a clinic, declared waste by a society so besotted with the need for endless “choice” that it rejects its responsibility toward the most helpless members of the human family. The children stand, struck dumb by anguish, at the grave of their mother or father who died via the flying shrapnel of someone’s absolutes.

And here is the message of Christmas: Righteousness came as a child, powerless by any world standard. He was born to an impoverished teenager and a carpenter. His first attendants were animals and shepherds. Yet within Him dwelt the full measure of the Godhead. He who is All Righteousness and All Powerful surrendered His power in order to come to us in love, to save us from ourselves. Shocking tragedy! We, clothed in the filthy rags of our human righteousness, were the cause of His death. Some of those involved in His murder actually thought they were doing God a favor. Yet death could not bind the Righteous One. He erupted from the grave and enthroned Holy Love in the hearts of any who would follow Him in surrender.

The manger, the cross, and the empty tomb are God’s antidotes to self-righteous piety, sanctimonious posturing, and moralistic acts of violence and repression. The manger bears witness that true righteousness comes in weakness and humility, as a child. The cross bears witness that none are righteous, no, not one. The tomb’s gaping mouth cries out that Love, not human righteousness, has the last and forever Word. “Destroy this temple, and I will raise it up again in three days,” Jesus told the authorities of His time, speaking not of the Temple but rather of His body. He is coming again, clothed in the power and glory He laid aside to rescue humanity. His judgment will be swift and sure, and none clothed in their own righteousness will see Love’s face.