Death in the Family: Robert Jones’ “The End of White Christian America” Finds the Body, Explores Some Clues 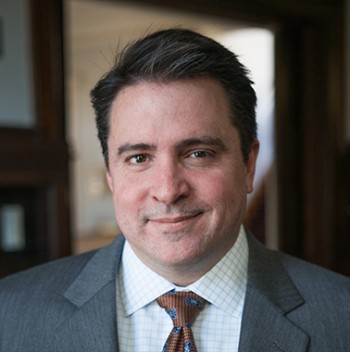 Robert P. Jones’ new book begins with a chapter entitled “An Obituary for White Christian America.” And it doesn’t get better from there. But his premise is driven home even for those of us who’d rather be in denial about the demise of our beloved subculture.

Architecture hardly seems a promising genesis point for the topic, but by giving both mainstream and evangelical congregations specific geographical contexts, then tracing how three religious groups lost their grip on the buildings they’d constructed, the point is made. Robert Shuller’s Crystal Cathedral, for instance, inaugurated in 1980 as a largely white and middle class “megachurch,” had by 2010 gone bankrupt; in 2012 the Roman Catholic Church purchased and began renovating the space for a multi-ethnic congregation quite different both theologically and culturally from Shuller’s congregation. Orange County, the Crystal Cathedral’s home, was known in the 1980s and 90s as the Christian mecca that perhaps inspired the Eagles’ cynical observations in 1976’s “The Last Resort”:

Some rich men came and raped the land,
Nobody caught ’em
Put up a bunch of ugly boxes,
and Jesus people bought ’em.

Of course, those Jesus People (like the veteran of that era writing these words) were white. But, in a refrain repeated often by Jones’ book, cultural shifts proved the undoing of this Evangelical paradise: “[I]f demographics had set Schuller on a swift path to success, the shifting regional profile of Orange County set the stage for his downfall. Beginning in the 1970s and 1980s, immigrants from Central America and South Asia began to move into the region, creating a demand for Catholic parishes, Buddhist temples, and Islamic mosques. Today, Orange County is home to the country’s third-largest concentration of Asian Americans, thanks to a growth rate of 41 percent between 2000 and 2009. During that same period, whites lost their majority status in the county, their percentage declining by 9 points in less than a decade.” 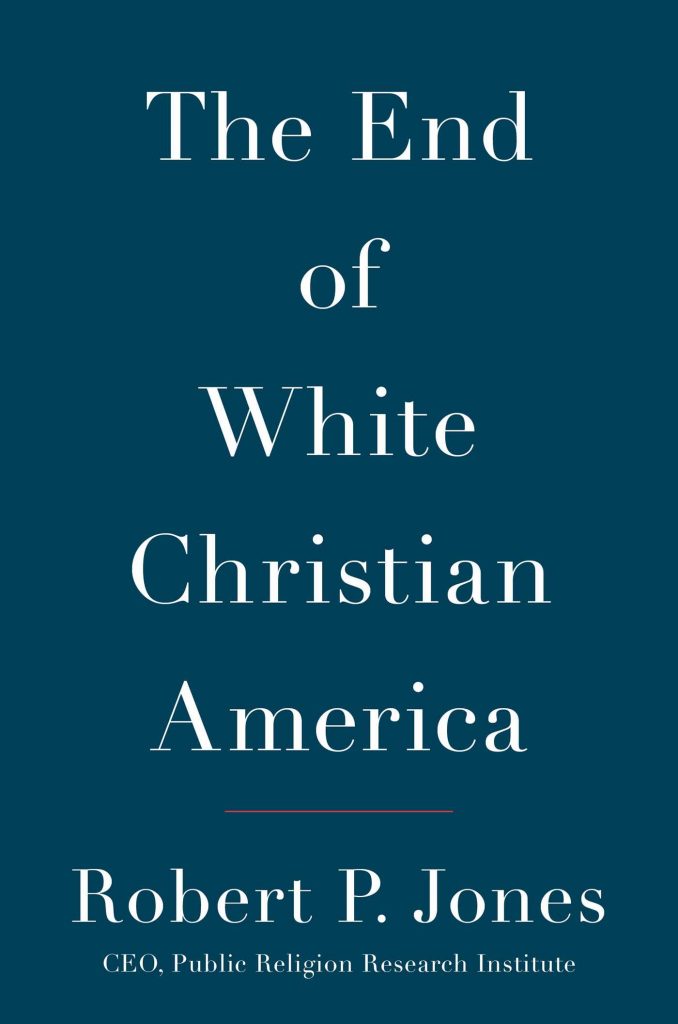 As a member of the Jesus movement and a ministry that began during that time — Jesus People USA here in Chicago’s Uptown neighborhood — I ponder our own architectural / geographical “movement” during the past and see similar changes. We had a very large festival grounds which in the early 2000s drew up to 30,000 attendees. By 2011 we had to end Cornerstone Festival and sell the grounds; reasons for this may have included not only a declining white Evangelical audience but also our own politically leftward journey, which may have sped up that process. We instead morphed back toward the city where we lived, and our Wilson Abbey (housing Everybody’s Coffee, a theater, an auditorium, and various other multi-purpose spaces), networking with a wide disparity of other “social justice” and arts-oriented individuals and groups.

The fact The End of White Christian America has me viewing my own faith community in its light is an indication of how important Jones’ work may be for others within both mainstream and evangelical churches to read. And Jones’ own role as CEO of the self-described “non-profit, non-partisan” Public Religion Research Institute – PRRI – gives his role in this discussion some weight.

That is not to say there aren’t some problems with Jones’ analysis. The book would have been better served if he’d entitled it “The End of White Protestant Christian America.” After all, Catholicism in this country up until fairly recently was also a mostly-white body of believers. Whiteness, and white privilege, extended into both Catholic and Protestant subconsciousness. It isn’t until page thirty that we are notified “White Christian America” is, for Jones’ purposes, WASP (White Anglo Saxon Protestantism). But that noted, The End of White Christian America is onto something.

As someone who grew up in a mainline theologically liberal Methodist Church and as a teenager discovered a more Evangelical / Charismatic stream of belief, I appreciated Jones’ melding of mainstream and Evangelical stories. Few of us within these respective camps recognizes the obvious: both are (or at least have been) Protestant, white, and (more often than not) middle class. The old war between fundamentalists and modernists, as religious historian Martin Marty observed, “[L]eft what remained of the Protestant establishment ‘ever less prepared to hold its place of dominance in American culture in the decades to come” (Jones, p. 34). The unexamined assumptions in both groups was that white Protestant America was America, and (not much of a reach) white Protestant Christianity was Christianity… at least, the “right” kind.

The 1950s and 60s were a time for mainstream white Protestants to be respectable, and for “bible believing” Christians to be looked down upon. But forces within Evangelicalism caused in the 1970s a powerful rise in Evangelical congregations even as the mainstream churches’ numbers fell. An apocalyptic tone wasn’t always front and center, but the psychology behind it may have more to do with social decline in power than we’d like to admit.

“As white mainline influence faded and white evangelicals began to be the dominant cultural voice in the late 1970s, their claim to represent an unrealized ‘Moral Majority’ had enough credibility to be plausible. But it also betrayed a defensive undertone. Instead of ushering in [mainstream churches’] ‘the Christian Century’ with a vision of international cooperation with all people of good will, their goal was to restore and protect a distinctly Protestant Christian America, which would then allow the United States to fulfill its divine mandate in the world. The white Christian conservative movement dominated the American political and cultural consciousness in the 1980s, 1990s, and even into the mid 2000s. But in the last decade, even this second wave of Protestant energy has begun to wane.”

Much of The End of White Christian America explores increasingly familiar “culture war” territory. Multiculturalism. Race. Gay marriage. Religious freedom (and what that phrase means to various parties). As I read, I felt the urgency of our situation: Can we admit our homogeneous white paradigm of Christian faith is dead… then find a way forward with Christ at the center?

The book’s last section, entitled “A Eulogy for White Christian America,” is so painful, and articulates what some of us (who have literally wept over it) have long understood. I personally think Mr. Jones underplays it by referring only to the death of an individual. It is more as though one’s family has died and one is left alone, bewildered, and wondering “Who am I now?” It is, as he suggests, a process of grieving. And Kubler-Ross’ five steps of grief — denial, anger, bargaining, depression, and acceptance — are where many of us white Christians live today.

It is very important to make it to “acceptance.” If we can, God has a new story for us. We don’t throw away our beliefs in Scripture. We don’t stop being citizens of a great nation — perhaps one of the very greatest in history. Not to stretch a theological point, but perhaps we should turn to the Scriptures themselves for this word picture found in John 12:

Very truly, I tell you, unless a grain of wheat falls into the earth and dies, it remains just a single grain; but if it dies, it bears much fruit. Those who love their life lose it, and those who hate their life in this world will keep it for eternal life.Whoever serves me must follow me, and where I am, there will my servant be also. Whoever serves me, the Father will honor.

Where is Jesus? Now? Does he live only in our “great” white monocultural myth? Or is he calling us to an adventure, a new life, a new way of seeing and being and acting in the world for his sake and our neighbor’s sake?

Jones points out that though mainstream white churches have gone further in dealing with their grief, Evangelicals are still stuck. “[W]hite Evangelical Protestants are still struggling to acknowledge their newly diminished status, and few have come to terms with the implications of WCA’s death.” His lengthy exploration of one Southern Baptist voice, Russell Moore, underscores how even as we seem willing to admit the end of any “Moral Majority,” we are far less able to give up on the idea that we hold the cultural and moral high ground and therefore should continue to seek holding power. Moore’s use of the Catholic Novelist Walker Percy draws particular criticism from Jones:

Moore would have been well served to heed the scathing critique, continued through Percy’s writings, leveled at white southern churches–most prominently represented by Southern Baptists–for their opposition to the civil rights movement. As the broader culture shifted to support civil rights for African Americans, white southern Christians certainly became ‘countercultural’ by staunchly maintaining the southern status quo, confident in their reading of scripture and comfortable in their segregated churches. But for Percy, this particular ‘contradiction of culture’ was nothing to be celebrated. In a 1965 essay entitled ‘The Failure and the Hope,’ Percy highlighted the tragic hypocrisy of white Christians in the South, who lived in a region that was more infused with Christian values than any other in the country and yet stubbornly maintained their collusion in the grace sin of reacism. As he put it, ‘A scandal has occurred right enough, but it is not the scandal intended by the gospels.’ Percy’s indictment of Southern Christians is worth quoting at length:

‘During the past ten years, the first ten years of the Negro revolution, a good deal was heard about the ‘good’ people of the South, comprising the vast majority, who deplored the violence and who any day would make themselves felt. But these good people are yet to be heard from. If every Christian era has its besetting sin… the twentieth century Christian South might well be remembered by its own particular mark: silence.

I wish there were some way to argue with The End of White Christian America. Instead, the rise of Donald Drumpf (not even mentioned in the book) seems to me the final shovelful of dirt in the grave. White Evangelicalism, so desperate to hold on to its legacy (real or imagined), has largely aligned itself with the most overtly amoral candidate for President this country has ever seen.

We are left, to quote a Walker Percy novel’s title, tasked to find “Love in the Ruins.” Jesus Christ has risen from the dead. And now… so must we.