Why are you so RUDE!? 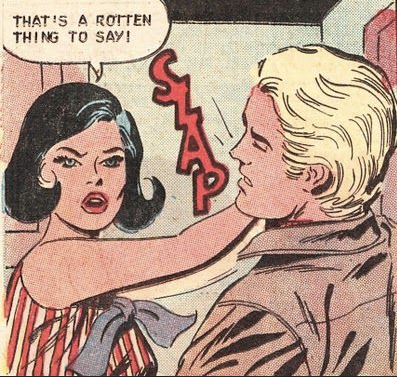 When I was young, and someone was rude to me, I nearly always let them know it. Words are my domain, baby, so don’t tap my turntable. But now that I’m floating in the sea of middle-age, I find my response is usually to just be quiet and take it. Too much energy expended to reprove ‘em, and there’s usually no real up side in trying it. Unless you just love to hear the sound of your own voice…. and I’m kinda tired of mine. At least, some days.

Love isn’t rude. Or as Paul put it in that painfully annoying 1 Corinthians 13: “Love is patient; love is kind; love is not envious or boastful or arrogant or rude.”

Now I’m not sure about this, but as I read this Scripture today (trying to get my head right after an encounter with rudeness), I noticed what could be two messages there — one primarily for the person being rude, the other for the person receiving the rudeness. The verses immediately surrounding this one underscored my idea… or (again) so it seemed.

If love is patient, rudeness isn’t. Rudeness in its impatience treats the other person unkindly, move them from being a co-equal traveler to an object to be gotten out of one’s way or forced to do what one wants. And what is rudeness perhaps about? Envy? A boastful pride that sees the other as mentally deficient — “thick”? Arrogant in word because, after all, one’s own ideas are obviously superior to the stick-in-the-mud one is trying to “get moving.”

There’s more. Unlike love (look up 1 Cor 13 verse 6), rudeness often does celebrate wrong-doing if that wrong appears to move the rude person’s agenda ahead more quickly. Likewise, rudeness holds truth at arm’s length, mainly because truth might undermine the personal feelings of certainty that allow rude words and actions toward another. Love, even if certain it is right, does not insist upon being right.

I so wish that this little lesson would remain one where I was the wronged, another the one who sinned against me. Perhaps it was in the incident that got me thinking about rudeness. But as I thought about that I suddenly became uncomfortable.

A few days ago, I was very rude to my wife — rude four or five times in a fairly short period. Why? Sure, I was tired. I wanted to half-doze in a chair and she was hoping to talk. I overrode her feelings as not of consequence. I spoke to her in a hurtful, unloving way, and violated all that I just wrote above. She patiently took it for a while, and then — with great restraint, I must say! — confronted me about it. I did, far too late, admit my sin against her and ask for her forgiveness. She kindly gave it to me.

That might shock you, and that’s good. I’m not deluded about my own spirituality so you, too, might as well know. (I smile weakly as I write that.)

But it also might convict you. Do you, like me, sometimes give yourself permission to speak rudely to “that one person” who annoys you at any moment? How about that co-worker, the one whose voice alone is enough to put you in a bad mood? Is habitual rudeness toward him going to pass muster with our Lord?

We watch TV, we read what people post on face book and blogs and news pages on the internet. I lean left on many political issues, but lately am sickened by both FOX and MS-NBC. Too much rudeness — the slash and burn barrage of word such as “idiots,” “clowns,” “disgusting excuses for humanity,” hurled at their ideological opponents. I want these media talking heads to be patient, to explain at length why they respectively believe a certain way. But it has become obvious that they’d rather mainline the emotional heroin of rudeness. It attracts us (what does that say for our spiritual health)? We love having an enemy to verbally bash and belittle.

Again, I’m not innocent in this. I do try. Christians, can we together attempt to see 2014 be a year where — from us at least — our language is salted with the fruits of love rather than the poisons of RUDE? First, love toward our family. Then to our friends. And at work. Next when we’re on line, whether commenting to someone’s face book feed trashing our favorite political figure or gossiping (not a good word, that one) about some fallen Hollywood idol. Can we avoid pointless arguments in favor of fruitful discussions focused on how to love one another?

And finally, how do we avoid rudeness toward someone who declares themselves our enemy? For me, I find that praying for them and keeping as silent as possible in responding to perceived rudeness from them are my two best ways to love my enemy. If I can do some act of kindness for them — one with no strings attached or sermons included — better yet.

What are your thoughts?