Could Ben Hecht — famous newspaperman, novelist, Hollywood Screenwriter, and for a time a Chicagoan — have visited a tavern at 931-39 Wilson and been inspired to write a story as a result of that visit? (See “Wild History” Parts 1 and 2, and JPUSA’s “official” Wilson Abbey page.) It would hardly be fair to claim outright that the “cabaret in the neighborhood” of Wilson and Sheridan was in fact located at 935 Wilson Avenue. But the story does have the dour newspaperman and his young giddy charge go down Wilson before entering the unnamed night spot. We’d perhaps like to think this story took place at 931-39. Of course, it may have only taken place in Mr. Ben Hecht’s imagination. Or, the rough frame of events may have unfolded at any of half a dozen joints up and down Wilson only a block or so from the story’s Wilson / Sheridan beginning.

What Mr. Hecht does best is to paint the 1920s much as that decade’s other best chroniclers did — Scott Fitzgerald couldn’t have offered more shiny surfaces or more hidden sadness. The ’20s was Wilson Avenue’s shining moment in the history of Chicago. But as Hecht wrote, “Wilson Avenue…. The wise, brazen little virgins who shimmy and toddle, but never pay the fiddler. She’s it.”

After you’ve finished reading Mr. Hecht on Wilson and Sheridan and flappers, you may want to try yet another well-known writer’s take on the very same intersection! But first things first….

One story from Ben Hecht’s 1922 A Thousand and One Afternoons in Chicago: 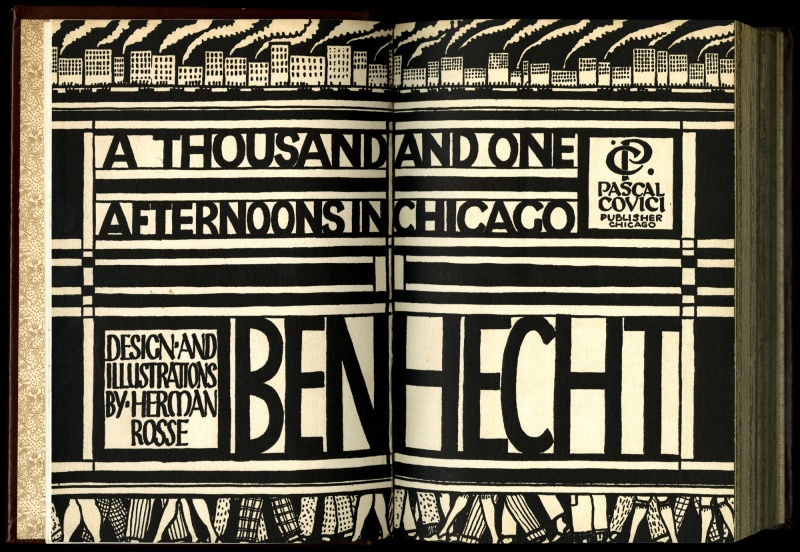 The newspaper man felt a bit pensive. He sat in his bedroom frowning at his typewriter. About eight years ago he had decided to write a novel. Not that he had anything particular in his mind to write about. But the city was such a razzle-dazzle of dreams, tragedies, fantasies; such a crazy monotone of streets and windows that it filled the newspaper man’s thought from day to day with an irritating blur.

And for eight years or so the newspaper man had been fumbling around trying to get it down on paper. But no novel had grown out of the blur in his head.

The newspaper man put on his last year’s straw hat and went into the street, taking his pensiveness with him. Warm. Rows of arc lights. A shifting crowd. There are some streets that draw aimless feet. The blazing store fronts, clothes shops, candy shops, drug-stores, Victrola shops, movie theatres invite with the promise of a saturnalia in suspense.

At Wilson Avenue and Sheridan Road the newspaper man paused. Here the loneliness he had felt in his bedroom seemed to grow more acute. Not only his own aimlessness, but the aimlessness of the staring, smiling crowd afflicted him.

Then out of the babble of faces he heard his name called. A rouged young flapper, high heeled, short skirted and a jaunty green hat. One of the impudent little swaggering boulevard promenaders who talk like simpletons and dance like Salomes, who laugh like parrots and ogle like Pierettes. The birdlike strut of her silkened legs, the brazen lure of her stenciled child face, the lithe grimace of her adolescent body under the stiff coloring of her clothes were a part of the blur in the newspaper man’s mind.

She was one of the things he fumbled for on the typewriter—one of the city products born of the tinpan bacchanal of the cabarets. A sort of frontispiece for an Irving Berlin ballad. The caricature of savagery that danced to the caricature of music from the jazz bands. The newspaper man smiled. Looking at her he understood her. But she would not fit into the typewritten phrases.

“Wilson Avenue,” he thought, as he walked beside her chatter. “The wise, brazen little virgins who shimmy and toddle, but never pay the fiddler. She’s it. Selling her ankles for a glass of pop and her eyes for a fox trot. Unhuman little piece. A cross between a macaw and a marionette.”

Thus, the newspaper man thinking and the flapper flapping, they came together to a cabaret in the neighborhood. The orchestra filled the place with confetti of sound. Laughter, shouts, a leap of voices, blazing lights, perspiring waiters, faces and hats thrusting vivid stencils through the uncoiling tinsel of tobacco smoke.

The newspaper man ordered two drinks of moonshine and let the scene blur before him like a colored picture puzzle out of focus. Above the music he heard the childishly strident voice of the flapper:

“Where you been hiding yourself? I thought you and I were cookies. Well, that’s the way with you Johns. But there’s enough to go around, you can bet. Say boy! I met the classiest John the other evening in front of the Hopper. Did he have class, boy! You know there are some of these fancy Johns who look like they were the class. But are they? Ask me. Nix. And don’t I give them the berries, quick? Say, I don’t let any John get moldy on me. Soon as I see they’re heading for a dumb time I say ‘razzberry.’ And off your little sugar toddles.”

“How old are you?” inquired the newspaper man abstractedly.

“Eighteen, nosey. Why the insult? I got a new job yesterday with the telephone company. That makes my sixth job this year. Tell me that ain’t going good? One of the Johns I met in front of the Edgewater steered me to it. He turned out kind of moldy, and say! he was dumb. But I played along and got the job.

“Say, I bet you never noticed my swell kicks.” The flapper thrust forth her legs and twirled her feet. “Classy, eh? They go with the lid pretty nice. Say, you’re kind of dumb yourself. You’ve got moldy since I saw you last.”

“How’d you remember my name?” inquired the newspaper man.

“Oh, there are some Johns who tip over the oil can right from the start. And you never forget them. Nobody could forget you, handsome. Never no more, never. What do you say to another shot of hootch? The stuff’s getting rottener and rottener, don’t you think? Come on, swallow. Here’s how. Oh, ain’t we got fun!”

The orchestra paused. It resumed. The crowd thickened. Shouts, laughter, swaying bodies. A tinkle of glassware, snort of trombones, whang of banjos. The newspaper man looked on and listened through a film.

The brazen patter of his young friend rippled on. A growing gamin coarseness in her talk with a nervous, restless twitter underneath. Her dark child eyes, perverse under their touch of black paint, swung eagerly through the crowd. Her talk of Johns, of dumb times and moldy times, of classy times and classy memories varied only slightly. She liked dancing and amusement parks. Automobile riding not so good. And besides you had to be careful. There were some Johns who thought it cute to play caveman. Yes, she’d had a lot of close times, but they wouldn’t get her. Never, no, never no more. Anyway, not while there was music and dancing and a whoop-de-da-da in the amusement parks.

The newspaper man, listening, thought, “An infant gone mad with her dolls. Or no, vice has lost its humanness. She’s the symbol of new sin—the unhuman, passionless whirligig of baby girls and baby boys through the cabarets.”

The newspaper man looking at his young friend saw her taking it in. There was something he had been trying to fathom about her during her breathless chattering. She talked, danced, whirled, laughed, let loose giggling cries. And yet her eyes, the part that the rouge pot or the bead stick couldn’t reach, seemed to grow deader and deader.

The jazz band let out the crash of a new melody. The voices of the crowd rose in an “ah-ah-ah.” Waiters were shoving fresh tables into the place, squeezing fresh arrivals around them.

The flapper had paused in her breathless rigmarole of Johns and memories. Leaning forward suddenly she cried into the newspaper man’s ear above the racket:

“Say this is a dumb place.”

“Ain’t it, though?” she went on. There was a pause and then the breathless voice sighed. She spoke.