Zimmerman Verdict: Bitterness and the Death of Hope

“You can’t make me do nothing but die!”

Perhaps I have no right to say what I’m thinking tonight — there’s no room for so-called “objectivity” in the midst of this tsunami of emotions — but I will say it anyway. Racism in all its power to distort justice has once again won a victory. I believe Trayvon Martin was a young man targeted, stalked, and killed because of the color of his skin. And no one will pay for that death.

A mother and father will mourn the rest of their lives over their son but that mourning will not return him. 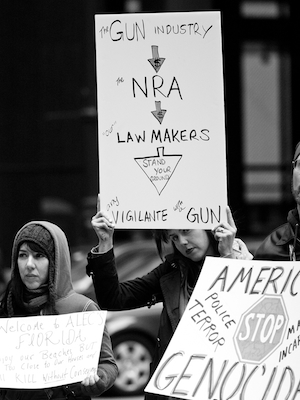 Congratulations, America. The streets have been kept safe… for white people. If you are black, young, and male? Watch your back.

As for me, an aging white male who is absolutely haunted over this story for reasons I myself don’t fully understand (though perhaps this story will help explain it), I feel bitter and angry. I’ve listened to white folks in my own neighborhood talk about “all the drug dealers… you know, those black boys on bicycles.” As if being young, black, and on a bicycle is the equivalent of being a criminal! They dismiss me as a political radical when I call them racist. But they are. Maybe every one of us with white skin is.

The nasty spirit of racism permeates this country and — as has been true since 1619 Jamestown and the sale of the first African slaves — it is those with the darkest skin who continue to pay the price for our nation’s continuing sickness. And tonight? I don’t feel much hope. It is in one sense the opposite of that giddy night in 2008 when we celebrated (some of us anyway) the election of America’s first black President. Tonight we are reminded that for ordinary Americans who happen to be black, life is often — OFTEN — an experience of being treated with contempt, violence, and even murder.

I am sickened, outraged, and near despair over the alleged “justice” this case was supposed to deliver. Everyone is rushing to say “Oh, don’t riot! Don’t let your despair lead you to acts of violence!” And just how does one avoid the despair? I should preach a nice Christian message about trusting God. But my fellow white citizens won’t get it. Black people have been trusting God much more thoroughly than white folks have ever had to trust God. Black folks wrote spirituals; white folks might have stolen them to sing, too, but they didn’t have a clue as to where that pain in praise came from.

We still don’t have a clue. But we heard yet another potential line from a spiritual tonight, as Trayvon’s mother said, “Lord, during my darkest hour I lean on you. You are all I have.”

In the end, all I can do is once again offer the message the sign I’m holding in the below photograph offers. A friend made the sign and handed it to me at a rally for Trayvon some months ago. In the end, it is what racism and the disrespect and violence racism sows comes down to. One child. Dead. Forever. 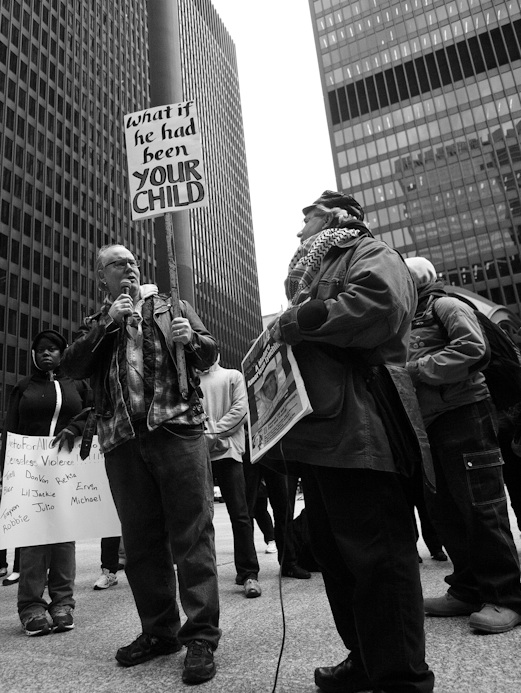